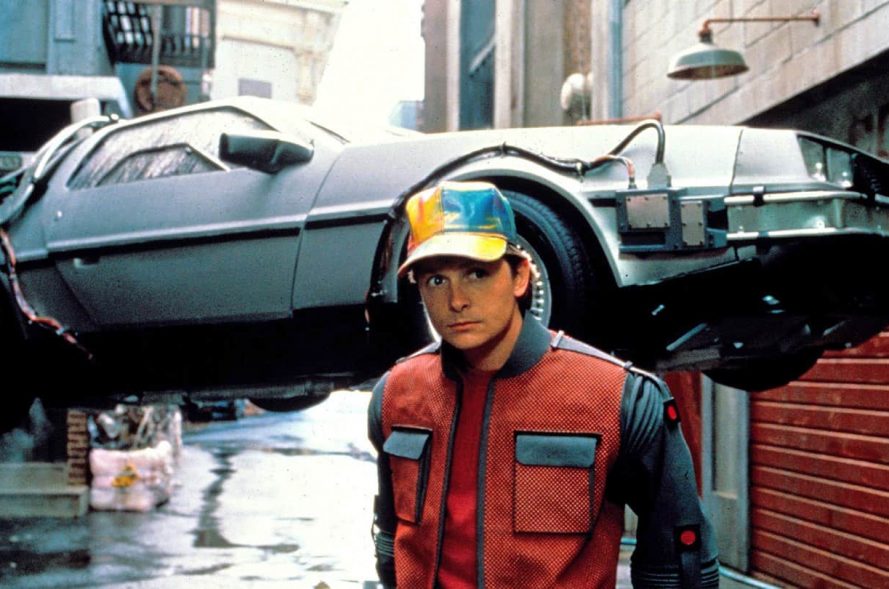 The Back To The Future trilogy has to be one of the most beloved movies ever made. Regardless of which one of the three is on tv, even if you’ve seen it a hundred times, it still draws you in and you end up watching it till it’s over. Marty McFly, played by Michael J. Fox is one of the best movie characters ever created and let’s not forget the Doc, Emmett Brown played by Christopher Lloyd.

His charming character makes the viewer laugh repeatedly throughout all of the three movies. Each character has their own importance to each movie and just like The General Lee from the Dukes Of Hazzard, the Delorean that doubled as a time machine, was a pivotal member of the cast. Any home theater enthusiast will tell you how much they enjoy watching any of the movies from this trilogy. These movies have all the elements we love in a home theater enviornment: fast cars, special effects, humour, interesting plots, and most important, a great cast that makes the experience of watching these movies so exciting. We are going to give you a glimpse into the trilogy with all the extra footage and perks you get from viewing this in the comfort of your own home theater.

The first Back To The Future movie was an instant hit when it was released in 1985. The setting depicts how it was for a teenager in that decade without the campy mocking that movies make nowadays. Marty lives at home, uses a skateboard to go to school with his back pack slung over one shoulder (this is still the way to do it, regardless if the remake of 21 Jumpstreet tells you otherwise). One of his closest friends is Emmett Brown, aka The Doc who invents a time machine out of a Delorean, (which is powered by plutonium that he stole from Libian terrorists).

Marty and Doc are found by these terrorists and while they shoot the Doc, Marty flees away in the Delorean and ends up in 1955. While in 1955, Marty accidentally bumps into his father, who at that time was just a teenager. Marty mistakenly interfers with how his mother and father would meet and ends up trying to fix it all before it’s too late. Marty finds the Doc and explains everything which enables Doc to help Marty get back home. Of course without plutonium, Marty won’t be able to get back unless a huge power surge is generated, luckily the lightening that hits the clock tower can send him back. After getting his parents together, singing and playing a mean guitar to the Chuck Berry classic, Johnny B. Goode, Marty gets back in time to get back to the future of 1985.

The first sequel takes Marty and Doc into the future of 2010 to help save Marty’s kids. What turns out is not what was expected as Marty buys a sports almanac and it falls into the hands of Biff, the same menace from the original movie. Marty and Doc then go back to 1985 to see everything has changed, they realize that Biff used the time machine and went to 1955 to give his younger self the almanac. With all the money he made from betting on sports, Biff changed Hill Valley and Marty needed to go back to 1955 to retreive the almanac and restore a sense of normalancy to Hill Valley. How the plot intertwines with the original movie is fantasic with scenes recreated to be from the first installment of the trilogy. In the end , Marty gets the almanac and saves Hill Valley. For the third movie which is mostly a western, Marty travels to 1885 to save Doc from “Mad Dog” Tannen. While there, Doc falls in love with Clara Clayton. The movie has it’s great moments where Marty gets into trouble in a saloon, meets Billy the Kid, and in the end, is able to get back to 1985.

The trilogy Blu Ray comes with some great features to be shared in your home theater. This comes in widescreen (1.85:1) and is in DTS-HD 5.1 surround sound which sounds amazing. The original movie has eight deleted scenes as well as director commentary. There are documentaries, “In The Beginning, “Time To Go”, and “Keeping Time”. There are lots of behind the scenes footage and a ten minute Q&A with Michael J. Fox. Let’s not forget the theme song for this movie was “Power of Love” by Huey Lewis and The News and that is also on here and you can watch the music video right here.

Part two also has deleted scenes (seven). There are more documentaries, “Tales of the Future” and “Time Flies”. Thee is also “The Physics of Back To The Future with Dr. Michico Kaku”, a scientist that explains time travel. There are more behind the scenes footaage as well as theatrical trailers, photo galleries, making of the Delorean, and other special bonus footage. Part 3 also comes with delete scenes, documentaries “Tales from the Future”, “Third Time’s the Charm”, and “Test of Time”. Behind the scenes footage, outtakes, theatrical trailers, and photo galleries are also included.

These movies are one of the most enjoyable experiences anyone can have while watching a movie in their own home theater and they are great for any age as well. If you have children or if you don’t, it will delight anybody in your family. Being 23-27 years old, they still stand strong against any movie that has been released over the years. We highly recommend the Back To The Future trilogy to everyone. If you haven’t seen it, you will be pleasantly surprised by how great these movies are. Below, we have links to all three movie trailers and we hope you decide to watch these in your own home theater soon.