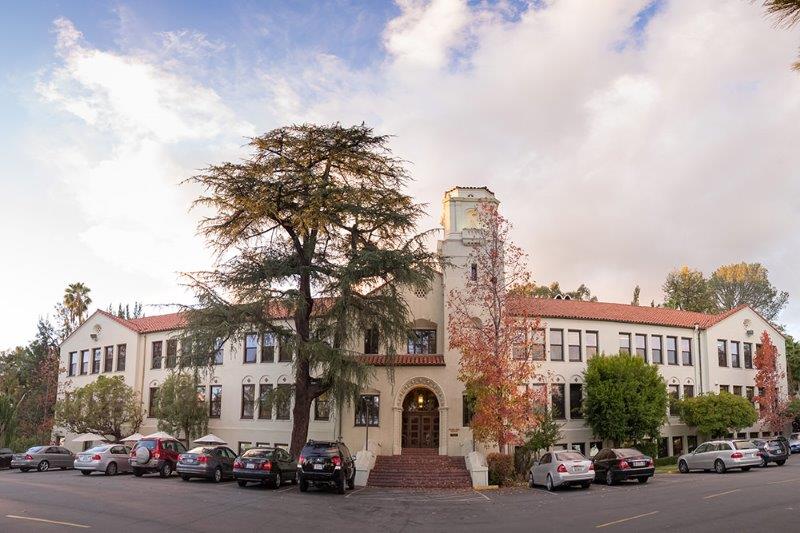 The preponderance of mobile phones with ever-better video capabilities, along with sites like YouTube where creators can post their videos, has led to a growing number of amateur filmmakers. Many of them learn through trial and error. Some others may invest in online classes or read any of the numerous books available on the topic. For those who are truly enamoured by the art of filmmaking, real mastery of their craft will come about through attending one of the best film schools to learn from professionals.

As with any sort of education, certain institutions will offer lesser or greater training or may focus on specific aspects of the craft. Some schools can boast a higher graduation rate or a greater degree of success among graduates.

If you are considering a career in film, or even if you simply wish to learn more concerning an art form that you are passionate about, here are some of the best film schools in North America.

In the fall of 1969, the former Center for Advanced Film Studies opened its doors as the American Film Institute. This school, which director David Lynch once said he would give up everything “in a heartbeat” to attend, offers advanced degrees in directing, screenwriting, cinematography, and more.

The AFI is considered one of the best film schools not only in North America but in the world, attracting an extremely high level of talent among students. It was one of the earliest schools to recognize and push for diversity, leading to a free directing workshop specifically for women in 1974.

Some of the graduates from the AFI include Darren Aronofsky, Terrence Malick, and Patty Jenkins. 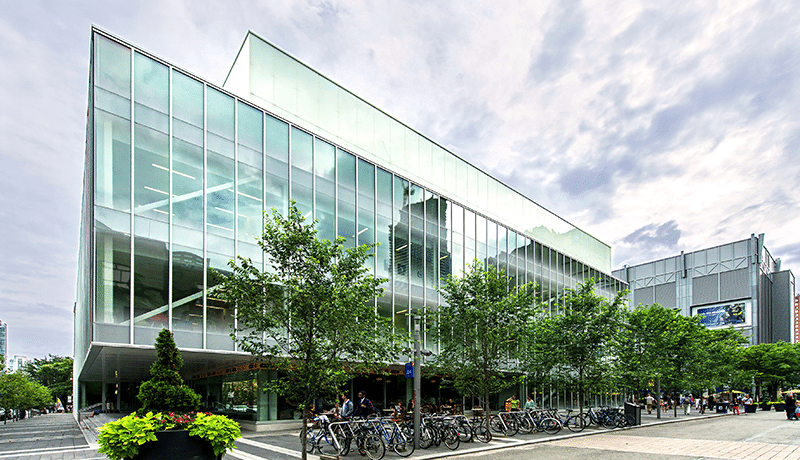 Mere steps away from Toronto’s entertainment district at the centre of the city, Ryerson University’s School of Image Arts allows students to study alongside professionals, learning while making film industry connections. The school promotes experiential learning and the development of Canada’s role in international film.

Students in the Image Arts: Film Studies, Bachelor of Fine Arts program receive real-world experience side by side with those already working as filmmakers, as well as internship opportunities. Courses include film theory, film technology, film production, cinematography, art direction, sound, writing, directing, and editing. Students in their third year can focus on digital media by taking the Integrated Digital option.

An academic framework for undergraduates is provided by the Film Studies Program, leading to graduate-level studies and careers in the Canadian screen industries.

Like the American Film Institute, the University of Southern California has a reputation for being among the best in the world when it comes to film schools.

This is the oldest university in the US devoted to film studies, having started in 1929, the same year that the Academy of Motion Picture Arts and Sciences announced the first Academy Awards winners. Courses include virtually all facets of filmmaking, allowing students to pursue whichever field interests them most. Undergrad and grad programs cover screenwriting, film production, animation, as well as digital arts and interactive media. In addition, they offer a producing program through the USC Marshall School of Business.

Admission to USC is low, making it highly competitive, but for budding filmmakers, it is a school that sits at the top of the list to consider. Some notable alumni include John Chu, Doug Atchison, James Foley, and George Lucas. 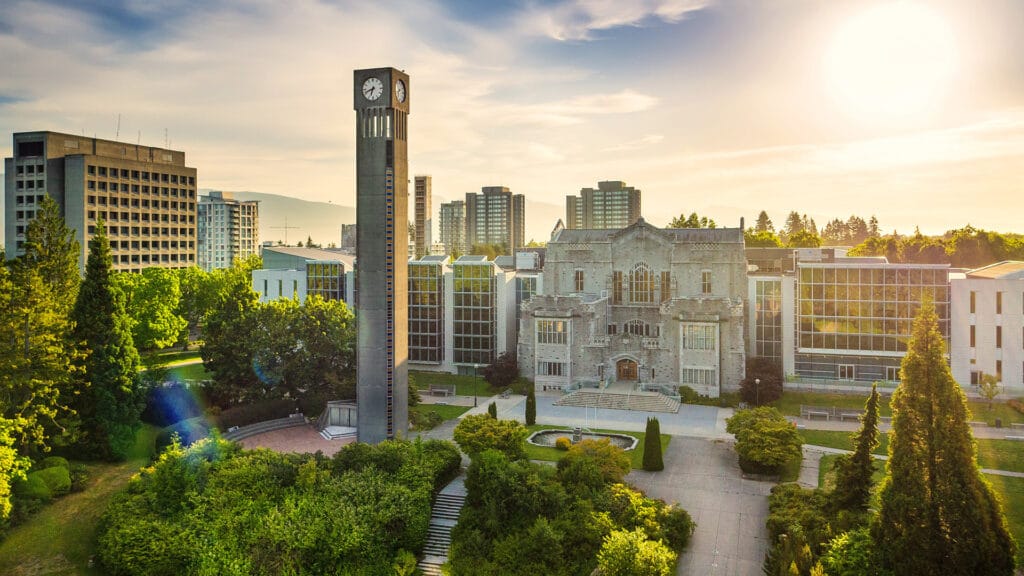 The University of British Columbia frequently ranks among the top 25 public universities in the world, and its Vancouver campus is home to a hands-on film training program that has been producing innovative artists for over a half century.

This training program aims to produce new, independent filmmakers who possess the necessary skills and vision to not only contribute to the industry but also help guide it going forward. When not in class, students will work with more senior students on student film sets, learning through active participation.

UBC’s four-year Bachelor of Fine Arts degree program is taught in multiple locations across the campus, including the NBC Studio, which is a classroom that includes a green screen and lighting grid. Editing rooms include computer systems with Final Cut Pro and Premiere software in addition to other software used in other aspects of post-production. Their courses include Film and Media Production, Introduction to Motion Picture Directing, Motion Picture Sound, Post-Production Techniques, and Cinematography. 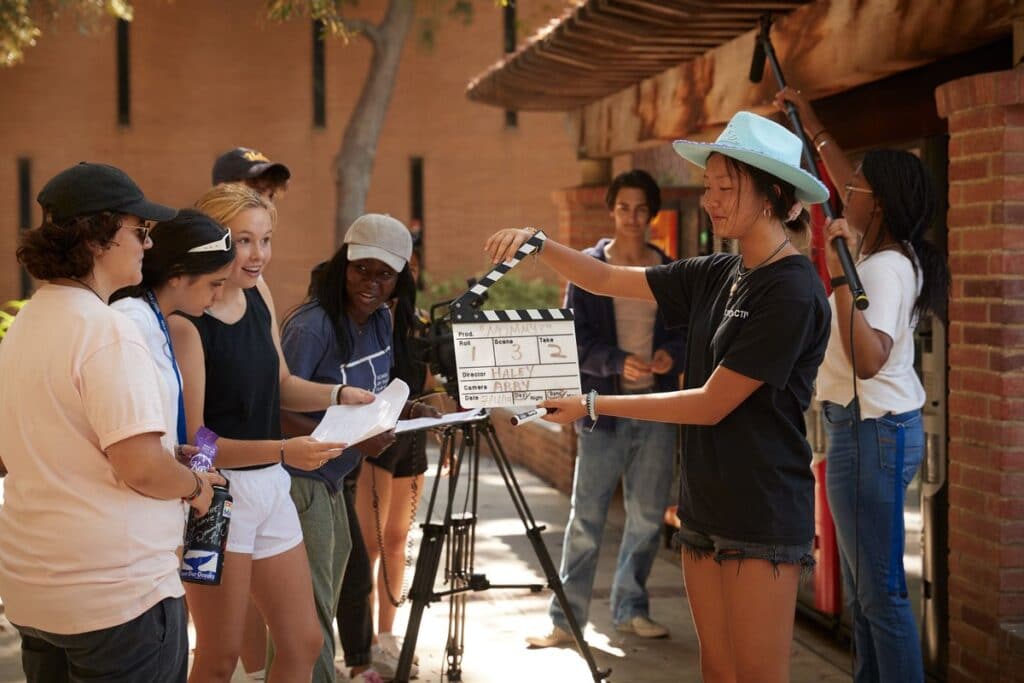 UCLA has been around for more than 60 years and is notable for being the first to incorporate theatre, TV, and film into one course. It remains one of the highest-ranked, best film schools in the US and competition is fierce among students from all over the world to claim one of the few spots offered each year.

York University offers a four-year program that includes courses in cinematography, sound, and editing, along with studies that examine directing, producing and screenwriting. Students work together in crews, guided by professionals with real-world experience and using industry-standard facilities in production and post-production.

New York’s West Village is home to the Tisch School of the Arts, another top film school, but one with a different sort of energy than can be found in California or elsewhere. The school offers a unique program for cinema, in which students earn a double major with a business degree.

Tisch is split into three institutes: Performing Arts, Emerging Media, and Film & Television, with many graduate and undergraduate disciplines available to students, such as acting, design for stage and film, and film and television studies.

Some of the notable alumni of Tisch include Woody Allen, Mahershala Ali, Philip Seymour Hoffman, Spike Lee, and Martin Scorsese.

George Brown College is located in downtown Toronto and has been called one of North America’s most important film-making hubs.

Students at George Brown may pursue the Sound Design & Production program, which focuses on producing sound for film and television, as well as video games due to the growth of the mobile entertainment and gaming industry.

Students will work alongside other media programs, creating sound for animation, video shorts, and games, in courses such as sound design, game and audio design, applied post-production, and location sound.

There is also a Video Design & Production diploma program that will introduce students to both traditional and emerging techniques. They will learn about digital production, digital video technology, digital storytelling, video editing, visual effects, editing, and more.

In just one year, you can graduate with a Film Production diploma and a demo reel of your work after studying the five disciplines of filmmaking while specializing in two of the following: directing, cinematography, producing, production design, and post-production.

Questions to Ask Yourself When Studying Filmmaking

With so many excellent film schools and a wide range of disciplines to study, it’s worth asking yourself a few questions when you are considering a course in filmmaking and attending one of the best film schools.

Why Go To Film School?

Who Will Be Teaching You?

Who will be providing your education? Many universities are relying less on tenured positions due to their expense and have been able to bring in some well-known industry professionals who have taken to moonlighting as visiting professors. They can bring real-world experience to the classroom, which can be of great benefit to you. On the other hand, a school that boasts big-name professors and cutting-edge materials may not work for you as well as a more modest environment with highly engaged, passionate teachers.

Is There a Culture of Watching Films?

Just as they say writers need to be readers, those who are pursuing studies in film should constantly be exposed to the tremendous possibilities of what film can be. Students should regularly be exploring great films to broaden their horizons and open their minds

Will You Leave School as Part of a Community?.

No matter what they study, everyone wants to leave school with prospects for a job, but it’s just as important to be part of a community of peers who share the same passion. While your talent, hard work, and persistence will be the foundation for all your efforts going forward, being part of a network of supportive, like-minded individuals can present numerous opportunities that would otherwise never manifest for you.

What Career Opportunities Await You?

Your ultimate career will depend on what you have studied and what you care to pursue. A career in filmmaking might focus on creative opportunities or commercial ones. Deciding what you will pursue upon graduation can influence your studies and choice of school. Some possibilities include:

Production Designer: Production designers are responsible for much of the visual tone of the film, working with producers and the director to design costumes, props, lighting, makeup, and more.

Screenwriter: These are the folks who create stories. Screenwriters take ideas and weave a compelling narrative, sometimes working on their own creations, other times re-working an existing story or idea to create something new and entertaining.

Cinematographer: Working closely with the director, cinematographers are often the ones behind the camera. When working on large movie sets, they will work with a group of camera technicians, light operators, and others involved in a shooting.

Film Director: Often one of the first positions people think of when they hear the term filmmaker, the director requires not only technical knowledge and a sense of aesthetics, but also organizational abilities and communication skills to coordinate with producers, designers, technicians, editors, special effects, sound editors, and many others. They must also be aware of their budget and have good financial acumen.

Producer: Producers are those behind the creation of the movie, responsible for budgeting, finding a director, hiring a writer, sourcing financing from studios and investors, assisting the director, signing actors, and much more. They oversee all elements of pre-production, production, and post-production.

Film Editing: As part of the post-production team, film editors will work with the director to eliminate unnecessary footage while keeping what is required for the final film. They may also work on set to produce real-time footage.

These are just some of the roles associated with filmmaking. Many others exist, from sound engineering to lighting design, makeup, costuming, and VFX and animation. Each of these roles plays their part, combining to create the films we know and love. The exact role you play in filmmaking will be a personal choice, but whichever path you choose, you will be instrumental in bringing what was once just a simple concept to life for the enjoyment of all.

Of course, once you have made, or helped make the latest cinema masterpiece, you will want to sit back in your Custom Home Theater Chair from Elite HTS in your home theater and enjoy your work