You have a weekend to watch some movies and Tom Cruise has a lot of great movies to choose from ranging from action to drama to comedy.  But which would you select at the very best Tom Cruise movies?

Born in 1962, Thomas Cruise Mapother IV, better known to his fans as Tom Cruise, has had an impressive career spanning 40 years and nearly 60 movies, beginning with Endless Love in 1981, followed by Taps that same year. He gained visibility playing Steve Randle in The Outsiders alongside Rob Lowe, Matt Dillon, Patrick Swayze, and other notable young actors. It was 1983’s Risky Business, however, that brought him to the attention of a much wider audience.

In the years since his debut, Cruise has cemented his position as one of Hollywood’s most recognizable and most bankable stars and has worked in every genre from action to science fiction, drama to fantasy. He’s even surprised fans in comedic appearances in films such as Tropic Thunder and Austin Powers in Goldmember.

Although he has had a few missteps with his various roles, Cruise has struck gold more often than not. Although he has yet to win, he has earned three academy award nominations and with two movies currently filming and three more announced, he obviously will continue to be part of the moviescape for years to come.

Whatever type of movie you are in the mood to watch, Tom Cruise probably has something to offer you. Here are some of the best Tome Cruise movies to watch on your home cinema this weekend, in no particular order:

There’s a pretty good chance that dramatically pronouncing “I want the truth!” will earn you a response of “you can’t handle the truth!” The scene in which Cruise’s Lt. Daniel Kaffee faces off against Col. Nathan Jessup (Jack Nicholson) in court is still quoted nearly 20 years after its release and clips of the scene have accumulated millions of views on YouTube.

It’s hard to imagine many actors holding their own against Nicholson, but Cruise managed to do so in one of his finest performances.  Critics agree on A Few Good Men is one of the best Tom Cruise movies because it allowed him to show his range and his ability to play off of other excellent actors.

Collateral finds Cruise in a role we don’t typically see him in – one we don’t root for. Playing Vincent, a hit man who arrives in Los Angeles to perform a series of assassinations. Much of Cruise’s time on screen is spent opposite Jamie Foxx, a hapless cab driver named Max who is recruited by Vincent to be his driver for the evening, taking him to 5 locations for a flat fee of $600, with a $100 bonus if Max can get him to the airport on time.

Believing Vincent to be in town on a real estate deal, Max is initially reluctant to take the fare, but eventually agrees. He realizes his mistake soon after, when at the first stop, a body falls from a third story apartment to land dead on his cab. Discovering the truth about Vincent, Max is forced to continue driving him, while trying desperately to find a way to extricate himself from the situation.

Born on the Fourth of July earned Cruise his first academy award nomination for best actor. Based on the autobiography of the same name, this is the story of Ron Kovic, a former marine turned anti-war activist. The movie follows Kovic during his time in Vietnam, where he accidentally kills a fellow soldier and becomes permanently paralyzed in battle.

Returning home, Kovic has difficulty dealing with friends and family, alienating them as he complains about hippies and those who are staging anti-war rallies. Kovic himself becomes increasingly disillusioned, feeling both forgotten and betrayed by his country.

Cruise had his next best actor nomination for Jerry Maguire, where he played the titular character, a sports agent who, following a crisis of conscience, promptly gets himself fired by writing a company-wide memo about dishonesty in the sports management business. 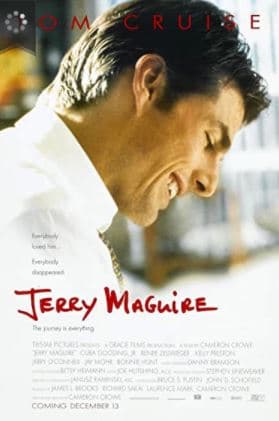 Starting his own management firm in the hopes of hanging on to his clients, he is joined by single mother Dorothy played by Renee Zellweger, and is reduced to a single client, played by Cuba Gooding Jr, who won the Oscar for Best Supporting Actor.

The movie also features another of Cruise’s most-quoted lines with “show me the money” and Zellweger’s own “you had me at hello.”

Although he is arguably best known today for his action films such as the Mission: Impossible franchise, Cruise has starred in a variety of dramas, including Rain Man, which took home Oscars for best picture, actor, director, and original screenplay. Although Cruise himself wasn’t even nominated, many felt that much of the film’s success was owed to his performance in support of Dustin Hoffman.

Cruise plays car dealer Charlie Babbitt, who returns home upon the death of his estranged father and discovers an autistic brother he never knew he had, named Raymond. With his father’s $3 million estates being left to the institution where Raymond lives, Charlie checks his brother out to take him back to Los Angeles. This leads to a cross-country trip, with Charlie learning more about his brother and remembering forgotten moments of his own past.

Despite how familiar some of the lines from Cruise’s movies may be, perhaps his most iconic moment involved sliding his way on-screen in his socks, shirt, and underpants to sing along to Bob Seeger’s “Old Time Rock ‘n’ Roll”. This teen comedy starred Cruise and Rebecca De Mornay and was his breakout film, grossing more than $63 million – ten times its budget. 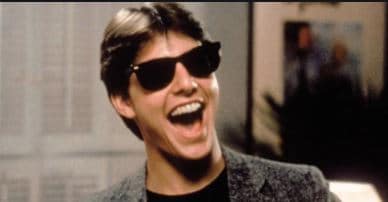 Cruise plays high school student Joel Goodson, who decides to make the most of his freedom when his parents leave on a trip. Initially being content with raiding the liquor cabinet and playing loud music, things soon escalate to involve a thieving prostitute, her pimp, and the drowning of his father’s Porsche.

Whether you are looking for a laugh, some romance, or intense action, Tom Cruise has you covered. Although we list 6 of the best Tom Cruise movies here, the list could easily accommodate another dozen. Whatever your taste in films may be, chances are there’s a Tom Cruise film (or two) that will satisfy. Grab one or more, make some popcorn,  settle into your custom Home Theater Seats, and set your home cinema on Cruise control.