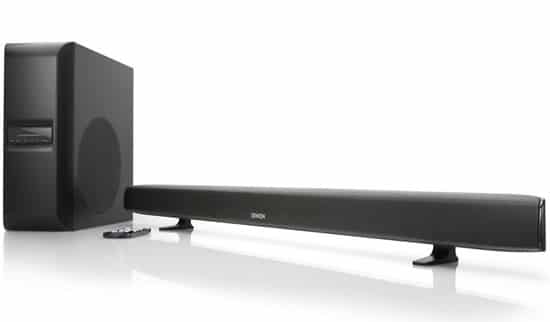 Denon will be introducing two new home theater surround sound systems, the DHT-8313, (MSRP $445), and the DHT-S413 (MSRP $573). There is no word right now if this will be available in North America, however if this system is as good as people are saying, we want to ensure we discuss this will you all.

Original reports state that the DHT-8313 is perfect for a 32″ TV with output levels of 20W x 3 for the front speakers  and 20W from the subwoofer. The DHT-S413 is made for 40″ TV screens and higher with front speakers output of 25W x 3 and 25W for the subwoofer. Each version has the Dolby Virtual Speaker surround sound, Dolby Pro Logic ll, DTS support, PCM audio for Blu-ray, and a surround option with five genre specific modes.

Surround sound and the placement of the speakers is detrimental to your home theater. The great people at Cinema Sound speak in-depth about this in the clip below.

Denon states they have “raised the bar” with their two new systems. We understand the importance of a sound system and where it’s placed. Just click on the picture to the left for a bigger version to help you set up your home theater. We have examples on how to layout your theater right here on our website under the heading, “Layout Ideas”. These are just diagrams but we do custom layout configurations for our customers.

We hope the DHT-8313 and the DHT-S413 are released in North America so we can have more reviews about it and we can hear it for ourselves. If Denon has raised the bar, we would love to test this out. There are so many choices on the market so choosing a surround sound system can be hard. We ensure to write about as many new releases as possible to give you options to choose from.

We always appreciate your comments and feedback so contact through Facebook, Twitter, email or by phone. If you have purchased the Denon DHT-8313 or the DHT-S413, we would love to hear your opinions.