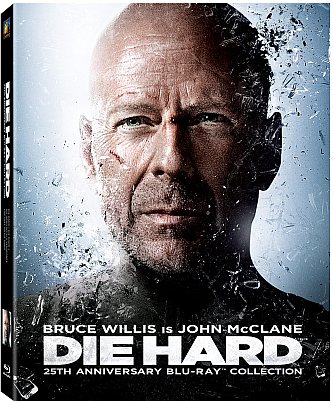 Yippee ki yay, the Die Hard series is reaching the 25th anniversary with a great new Blu-ray release. John McClane (Bruce WIllis), has become a beloved movie character and with a new movie coming out this year (A Good Day To Die Hard), to coincide with the 25th anniversary, 20th Century Fox is releasing the first four movies in a special edition Blu-ray DVD. This five disc edition will be released on January 29th, 2013. The contents of this collection: (click on each movie to watch the theatrical trailer)

Here’s the trailer for part 5, A Good Day To Die Hard (2013) (not included in this anniversary edition as it will be in theaters this year)

Die Hard is an action packed franchise with amazing action sequences, car chases, explosions, and great casts. Your home theater or your man cave has one necessity (besides the home theater seating and equipment) and that is Die Hard!