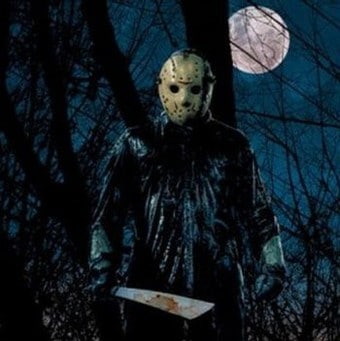 On October 18th, we did our first part of our look at halloween movie favourites and with this being the official halloween weekend (all the parties will be this Saturday), we are now going to feature some of the best scary movies for you to enjoy. Last week we featured paranormal and supernatural movies and this will we will be looking at some of the best slasher movies ever to hit the silver screen. There are so many great slasher flicks so it’s not easy to list them all. Here you will find some that are great for this time of year.

Halloween (2007 reboot directed by Rob Zombie): Michael Myers is one of the most frightening serial killers to grace the horror movie genre andRob Zombie’s reboot put this franchise into another zone. Rob Zombie’s 2007 reboot shows you how Michael Myers became the psycho we all enjoy to watch. This version is graphic and the scenes can make some people very scared. A perfect halloween movie!

Friday The 13th (all 12): Jason Vorhees, everyone’s favourite hockey mask wearing serial killer entertains in all twelve movies in this franchise. We had a blog on the franchise back in July (Friday the 13th, 2012) which can be viewed here. Since 1980, the Friday The 13th franchise has delighted horror movie fans and given Halloween season something to look forward to. Regardless of which one you watch, you will be entertained from start to finish. One of the most famous movies would be Freddy vs. Jason (yes they battle!) The Last House On The Left (1972): This is the movie that started the slasher genre. Yes the 2009 reboot was good but this 1972 classic is the one to watch. When this was first released, it scared the living pants off of movie goers. We guarantee that 39 years later, this movie will creep you out even more than the reboot. The Texas Chainsaw Massacre (1974): We all enjoy the 2003 reboot however the original is fascinating. Psycho chainsaw killer Leatherface was in all his glory in the original version. This is not a true story however the marketing behind this movie was so well done that people thought it was true. To this day, I am worried about driving through Texas! If you want to be scared this Halloween, do yourself a favour and watch this version. A Nightmare On Elm Street (All 9 of them): Freddy Kruger, the razor blade glove wearing teen killer only attacks you in your dreams. So if you are easily scared you may not want to watch any of these because if you dream about it, you may think he will be after you! The 2010 reboot had elements of greatness but if you really want to enjoy this franchise, stick with the original eight. The original is a fan favourite and that is highly recommended (see the trailer below). Don’t forget that Freddy vs. Jason pits Freddy Kruger and Jason Vorhees for an all out battle. So here are some of the best slasher movies to scare you this Halloween season. With the blog from last week, part 1 featuring paranormal halloween movie favourites, you have great movies to watch for the first time or for some of you, once again. Please ensure you are a fan of this genre as these movies are not for everyone. Have a safe and happy halloween weekend everyone.