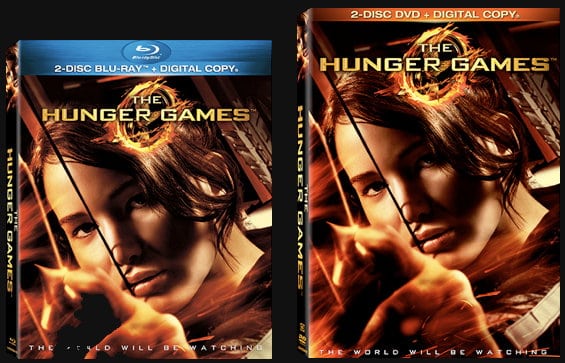 The Hunger Games was released on Blu-ray and DVD on August 18th and became the biggest selling DVD of the week with sales of 4 million copies. Starring Jennifer Lawrence, Josh Hutcherson, Liam Hemsworth, Woody Harrelson, Elizabeth Banks, & Donald Sutherland, this movie went on to gross $680 million dollars worldwide. The movie is based on a novel with the same name, written by Suzanne Collins. The Hunger Games takes place in a future nation called Panem where twelve boys and girls have to participate in something called the Hunger Games.  These games are televised annual events where contestants must fight to the death until one is the winner.

The Hunger Games Blu-ray DVD is a two-disc set, disc 1 is the feature film and disc 2 has all the bonus features. The bonus contents are the Game Maker: Suzanne Collins and the Hunger Games Phenomenon, The World is Watching: Making the Hunger Games, Letters from the Rose Garden, Controlling the Games, A Conversation with Gary Ross and Elvis Mitchell, Preparing for The Games: A Director’s Process (Blu-ray only), Propaganda Film, & a Marketing Gallery. This also comes with the ultra-violet copy.

Reviews have been positive for the Blu-ray & DVD release. Entertainment Weekly rated the movie an A- & the extras a B- while Life & Style gave this 3.5 out of 4 stars.  If you are contemplating whether you should or should not purchase it, read some of the Amazon customer reviews here. On average the customer reviews gave it 3.8 out of 5 stars. To purchase either the Blu-ray or DVD please click here. A sequel, Catching Fire, is to be released next year. The book, The Hunger Games, is a trilogy which means we have more sequels to look forward to.