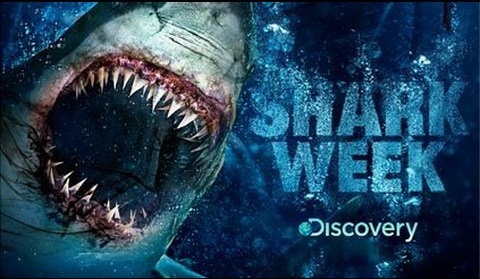 For 25 years,  Shark Week on the Discovery Channel has been one of the most anticipated weeks in television. From the tiny ages of four to the most mature of ninety-nine, people of all ages love Shark Week.

The Discovery Channel is celebrating the 25 years of Shark Week from August 13 till August 19. The programs are amazing & this year, Shark Week has become interactive.  Click here to download the Shark Week Plus App & Shark Week Bingo App from the App Store. You can enter the “Chompdown” Competition and play Shark Games which includes Shark Munch, Great White Shark Puzzle, & Shark Week Picture Pieces.

“Air Jaws Apocolypse”, “Sharkzilla” (a look at the Megalodon), “How Jaws Changed The World”, “Great White Highway”, & “Shark Week’s 25 Best Bites” are just some of the fascinating programs this year. What makes Shark Week special is their ability to educate the viewer on the behaviour of sharks. Sharks often stereotyped as vicious creatures out to kill humans at any possible chance. These programs show that this is not the case at all. Sharks are intelligent creatures and the fact they have been around before the dinosaurs roamed the earth does state the survival instincts they have. With the recent media coverage of “shark finning” (the removal and retention of shark fins and the discard at sea of the carcass, most often still alive when it is tossed back into the water. Unable to swim, the shark slowly sinks toward the bottom where it is eaten alive by other fish), the public needs to be aware of the importance of sharks. The Discovery Channel helps bring awareness to the beauty of these creatures.

Coincidentally, this week also brought the release of a must have Blu-Ray DVD’s. The 1975 blockbuster that scared a nation, Jaws, has been released as part of Universal Studios 100th Anniversary Edition. Jaws terrified a nation, scaring people away from the ocean. As a child, I saw this movie and was too scared to go into the shower! The two disc set comes with bonus content, “The Shark Is Still Working:The Impact & Legacy of Jaws”, “The Making of Jaws”, “Jaws:The Restoration”, deleted scenes, a digital, and an ultraviolet copy. You can purchase a copy from Amazon.

For those of you with 3D home theaters, the IMAX: Sharks 3D Blu-ray DVD will keep you entertained. Presented by Jean-Michel Couteau, IMAX: Sharks 3D gives you an up close look at Great White, Hammerhead, Whale, and various other species of sharks. This documentary shows you that sharks are not malicious man-eating machines. You can also purchase this from Amazon.

Sharks are fascinating creatures and Shark Week on the Discovery Channel is entertaining and educational. For a full schedule of all shark documentaries this weekend, please click here.

Give us your feedback on this or any other home theater related experience. We would love to hear it.