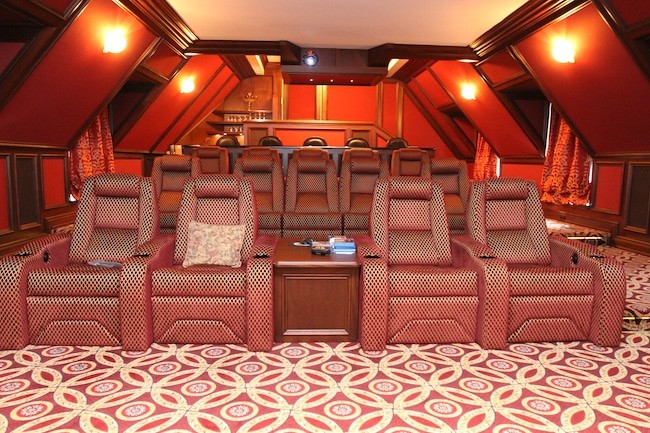 Imagine standing in the dark, faced with three remote control devices, a row of light switches, and no idea what to do. The shadowy outlines of theater seating are just about visible, and there’s a screen in the room, but it’s impossible to see which wall it’s on in the dark. Familiar? We’re not surprised!

Often, most of the design budget goes toward highly visible aspects of a home theater: top-of-the-range devices, luxury seating, an incredible screen, and killer speakers. But designers should leave enough budget for one other essential aspect of the overall design–the control system.

The secret to a good user experience is that the theater is not just easy to control but intuitive. That it automatically does the things that are expected of it before anyone wonders “I wonder how you turn the lights on?”

An intuitive theater is one where a home theater automation system connects everything from lighting to sound. Where users never have to paw the walls in search of a light switch. A bad theater design is one where users are forced to flick a series of switches to “see what happens.”

Creating a smart custom home theater is all about finding the right “brain” to connect all the A/V equipment. In this blog, we’ll look at the elements of home theater automation control that are crucial as well as the three control systems that get it right.

Recommended reading: You asked, we answered. A guide to luxury home theater design.

How to automate a luxury home theater

A state-of-the-art home theater is going to have a lot of equipment that needs controlling. A drawer full of clickers is often required to control all the different components, as well as some often ambiguous switches on the wall. Rather than treating these components as separate entities (each with an individual controller), program them to function as one. Instead of having ten clickers and always somehow losing the one needed, why not invest in one centralized control system that removes the need for all these moving parts?

Use a touch-screen device to operate everything

Install the control system on an iPad or tablet. The bigger screen makes it easier to use than a traditional clicker or a phone, and the touch screen makes it intuitive for everyone. Watching a movie or changing settings will always be a few swipes away, and the display allows for space for clear labeling and design. A dedicated tablet is best, rather than a multipurpose one that already had a million apps that might be distracting for users.

Scenes are preset control functions that are set up in advance. For example, a “play movie” scene may connect a series of automated actions that should take place when a movie plays: lights dim, blinds lower, sound and projectors roll, and the film begins to play. But scenes don’t have to be as simple as this. Kids may prefer the louder sound and a little more ambient lighting than adults, so “play a movie for kids” might be a required scene.

The options are endless, and sitting down with an A/V integrator to discuss the different variations is vital. Perhaps you want a “pause movie” and “pre-movie” setting, or maybe you want to get elaborate with lighting and sound and have thematic scenes saved to your control system, like “karaoke night” or “gaming frenzy.”

Automate everything for the ultimate experience

Don’t just stop at the apparent settings like lights and play movies. Make sure you incorporate other elements of the room, such as heating, air-con, and blinds. A control system works best when it taps into every aspect of the room, and it’s possible to automate almost anything these days.

Hire professionals to deal with wiring and electrical

Excellent home theater control and automation aren’t hard to find, but many resorts to YouTube videos and DIY–to disastrous results. There’s no point pouring money into expensive equipment and then installing it without proper wiring, ventilation, and a decent control system. Professionals will save you money in the long run by setting up your equipment correctly and will usually call out for repairs when issues occur.  In contrast, when DIY jobs go wrong, it can cost more to undo the mistakes than it would hire a professional A/V integrator in the first place.

We’re not going to lie; control systems are fun! And the ease of use can get pretty addictive. We recommend a scalable system because it’s not unusual for those with automated home cinemas to want to turn their entire abode into a smart home.

There are plenty of home theater control systems on the market, but we recommend the big three: Savant, Control4, and Crestron. These are head and shoulders above their competitors, and often it will depend on which system the A/V integrator is most comfortable installing. It can be wise to get their advice before investing in a system.