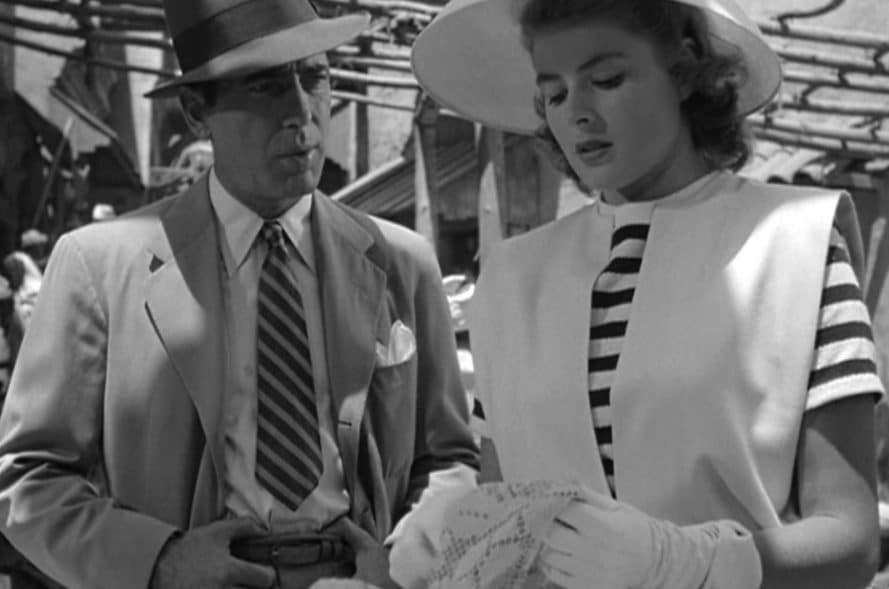 Whether a die-hard romantic or a hardened cynic, it’s hard to resist the charm of an old-fashioned romantic romp. We’ve left movies like The Notebook for others to recommend and have instead curated a slightly more unusual list of Romantic Movies to watch. So, whether you’re in the mood for some contemporary classics or a romantic comedy binge, we’ve got a little something for everyone. Stock up on Kleenex, soft blankets, and invite friends around for a weep. We’re sure these movies will fill any home theater with emotion.

At first glance, these films might not appear to have much in common but rest assured, they are all classic romantic movies to watch. From the unforgettable chemistry between Humphrey Bogart and Ingrid Bergman to the vibrant world created by Douglas Sirk, all these films were products of the ’40s/’50s, before the modern era of cinema. Each story is a mix of melodrama, romance, heartbreak and tells a complicated story with a happy ending.

Set in London, in the ’40s, Brief Encounter is the story of a bored suburban housewife and a chance encounter. Directed by David Lean, who went on to make Lawrence of Arabia and Doctor Zhivago, this is a deeply felt and personal love story from a master of the craft.

All That Heaven Allows

A Hollywood melodrama about a widowed woman who starts a relationship with a man from a lower class, causing conflict with family and friends who don’t understand. An irresistibly beautiful film from Douglas Sirk, the master of melodrama.

A parable about America’s neutrality during World War II. Rick Blaine is a weary, ex-patriate who owns a nightclub and would rather avoid the war. That is until an old flame shows up and changes everything. One of Hollywood’s masterpieces, Casablanca is the perfect romantic movie to watch at the end of this movie marathon.

In our compilation of romantic movies to watch, each film takes an experimental look at modern relationships, avoiding the clichés so typical in the genre. A window into love in the modern age and all its complexities; these films explore the possibility of deep connection in a world of distractions.

A chance encounter on a train to Paris kicks off a night of conversation and connection between two strangers. A love story for the ages, this is the first in Richard Linklater’s trilogy and captures all the hope and fear of early twenties romances.

Eternal Sunshine of a Spotless Mind

A jarring love story, examining a relationship through memories both good and bad. Jim Carey shines in one of his few dramatic roles, instilling his character Joel with a palpable sense of anxiety. Kate Winslet’s Clementine is equally arresting. The funny, sad and vaguely terrifying rom-com asks more questions than it answers.

What’s not to love about a good old rom-com marathon. This genre gets a lot of stick, but few movies embrace joy so readily. With satisfying endings, big payoffs, and striking leads, this marathon promises laughter and earnest, heartfelt stories.

From the pen of Nora Ephron comes the gold standard in modern rom-com Set over a number of years, this winding romance builds up the frustration between two people destined to be together but kept apart by chance, circumstance, and ill-advised love affairs. Meg Ryan and Billy Crystal both give career-defining performances.

A wonderful, quirky, and light, breakthrough French film of the early 21st century. The delightful Amélie’s raison d’être is to make the world a better place, and if she falls in love along the way, so be it. Full of unexpected humor, this is an unusual love story that has wiggled its way into hearts across the world.

Bollywood films are rarely ever one thing and Sultan is no exception. A rom-com and musical, that’s also an action-packed, rags to riches story. The unexpected plot follows a wrestler who falls in love and isn’t shy about dancing his way into the heart of his beloved. Funny, silly, and surprisingly tender.