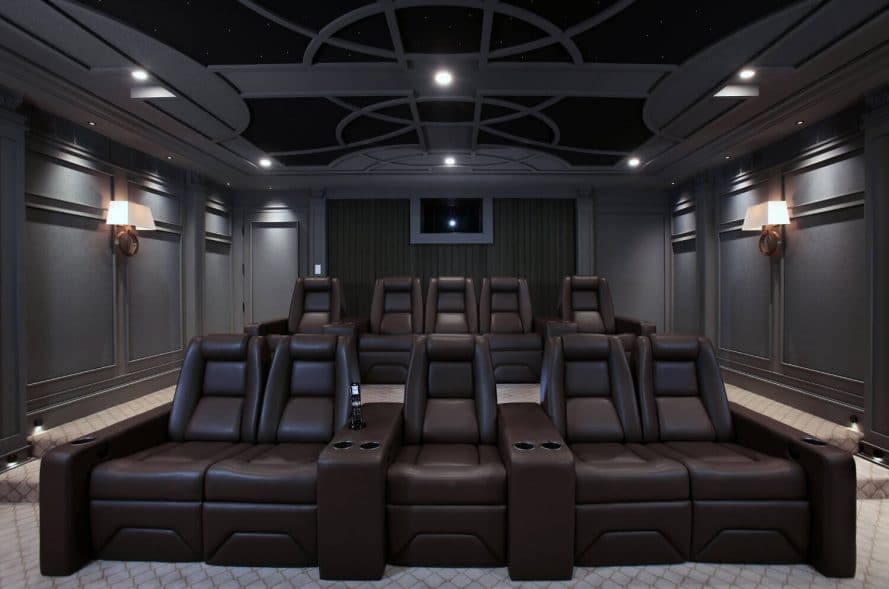 Looking for a new projector? Check out our guide to the best home theater projectors of 2020.

Below we have detailed some of the key factors to look for in top quality home theater projectors, including a few trusted brands across a wide range of price points. Educate yourself so when you’re ready to buy, you pick the perfect projector for your custom home theater environment.

Jump ahead to the section you’re interested in by clicking any of these topics:

●      How size and room layout impact the projector you choose!

●      What does “throwing” mean in relation to projection?

●      How does ambient light impact projection?

●      What kind of projector is best for my home theater?

●   LCoS, or liquid crystal on silicon

Recommended reading: You asked, we answered. A guide to luxury home theater design.

1.   Why size and layout of the room matter

Room size and layout are major factors to consider before buying your projection system. A projector is different from a Blu-Ray or DVD player.

In a front projection system, the projector casts (or “throws”—see below) the image onto the screen from a distance, either via a bulb or laser system. And because its job is to project the image, it must be placed a certain distance away from that screen to ensure a clear picture. Too close or too far away, the picture is unwatchable.

With rear projection, the projector sits behind the screen and casts the image forward onto the viewing surface. A significant issue with rear projection is the loss of brightness because so much of the light reflects off the actual screen, back toward the projector. This will necessitate the purchase of a more expensive projector with an even higher brightness rating, plus you need to have the space behind the screen for the projector to throw the correct image size and a decent ventilation system installed to keep your equipment from overheating.

2. The only “throwing” here should be from your projector

The trade-off with a short- or ultra-short-throw projector? They can be expensive, and some just aren’t as sharp as their non-short-throw counterparts.

3. Let there be less light

Assess how much ambient light spills into your theater space. If the home theater has windows (as is common in a living or family room), your projection needs will be different than a custom home theater built in a windowless space, such as in a basement. The more ambient light, the brighter the projector will need to be (your projector will need to have a higher lumen count) and more modifications will need to be made to the space to close out that light for optimal viewing.

4. What kind of projector is best for my theater?

DLP projectors are typically the least expensive option for budget-conscious consumers. Cheaper DLP models have been known to create what’s called a “rainbow effect,” flashes of color across the screen. Some people seem to have problems watching movies played on DLP projectors because of their brain’s interpretation of the RGB (red-green-blue) color sets. A more expensive DLP projector can greatly minimize the rainbow effect.

A DLP projector produces its picture when light reflects off a chip that has millions of tiny mirrors affixed to it. Less expensive home and portable DLP projectors use only one DLP chip, which processes red, green, and blue—or RGB—light sequentially, one after the other, via a “color wheel.” (For context, most commercial movie theaters use three-chip DLP projectors as these higher-end machines can simultaneously process individual beams of RGB light, thereby producing bright, high-quality images.)

In terms of DLP brands, you can’t go wrong with Optoma, BenQ, Epson, JVC, and ViewSonic.

The 3LCD projectors offer a sharper image, a three-times-wider color gamut, and superior picture quality to their DLP counterparts. The 3LCD tech means no rainbow effect, plus it delivers a short lag time, which will keep your gamers happy. The brightness of the colors projected by a 3LCD system is vibrant and rich, which means you don’t have to worry as much about the ambient light spilling into your theater space. The 3LCD models are often the go-to choice for classroom and corporate environments (Panasonic is a leader in this category).

3LCD projectors have three separate LCD imaging chips. White light is split into three separate colors—red, blue, and green beams—and then each of these colors is filtered through its own LCD chip. These chips then work with a prism and dichroic mirror system to produce complete, clear colorful images. 3LCD projectors do not suffer from the rainbow effect as we see with single-chip DLP projectors. Further, they are more energy-efficient, offer better color reproduction, and better white and color brightness.

As the industry evolves toward developing laser-based projectors, it would seem that Epson has cornered the market on these 3LCD projectors. Here are a few Epson projectors to consider:

3. LCoS, or liquid crystal on silicon

Usually, the most expensive models are available to the consumer market, an LCoS projector also offers excellent image quality, superior high-resolution output, and deep black levels, which makes it a favorite among cinephiles. They’re a bit heavier than their counterparts, weighing in at 10-12 lbs. You’re also not going to have to deal with the rainbow effect mentioned above, though some motion blur is possible (not great if you’re using it for gaming).

If money is no object, an LCoS projector is a serious option for your custom home theater.

LCoS projectors are considered a hybrid between the DLP and 3LCD technologies. These projectors use reflective technology but instead of mirrors (as with the DLP), it uses liquid crystals. It doesn’t have a color wheel, and LCoS-based projectors typically employ three LCoS chips, like the 3LCD, to modulate and deliver the distinct color channels (red, green, and blue).

The home theater projectors listed above use lamps as the light source for their image projection. Brightness can be a concern, so look for projectors with a high enough lumen output to satisfy your needs. Remember too that lamps use bulbs—and bulbs burn out.

Instead of using the RGB lighting system to project colors onto the screen, a laser projector generates the exact colors it needs to build the picture. This translates to a brighter on-screen image and terrific color reproduction and black levels, and it’s remarkably energy efficient when compared to its bulb-using counterparts. In fact, a laser projector will last about 20,000 hours whereas a traditional bulb will usually last around 2000 hours.

Again, laser projectors can be pricey, but if a bright image is really important to you, the technology is superior here.

As with the other projectors noted above, top brands continue to be Optoma, BenQ, Epson, JVC, Sony, LG, and ViewSonic.

What about projectors for the gamers?

Video games are a different beast from films. When you’re choosing a projector, it’s imperative to consider input lag. Input lag is a hot-button issue for serious gamers as it describes the lag time that happens between the gaming system sending the frame to the monitor (or projector, in this case) and the monitor/projector actually displaying that frame. A lag time of fewer than 15 milliseconds is preferred.

A quality custom home theater should be built to last. Sure, the technology is changing quickly—every new year will bring beautiful new home theater projectors to market, especially with the 8K tech about to explode—but choosing a projector from trusted brands and working with a top-notch designer who relies on skilled, talented installers will bring years of unrivaled home theater enjoyment, without the sticky floors or chatty seatmates!